Chow Kok Hwee, CEO of Chosen Holdings, has faced more than his fair share of negative surprises in2011. Confronted by wild foreign-exchange fluctuations, pricing pres-sure and lower demand, the co-founder of the plastic injection moulding specialist has had to issue three profit warnings since February. And, just when sales in Singapore are starting to recover, with supplies of key components returning after being disrupted by the Japan earthquake in March, Chow now has another major challenge on his hands.

Floods in central Thailand, described as the worst in five decades, have already claimed more than 300 lives and are wreaking havoc on businesses. The deluge started in July but escalated this month, with more than a third of the kingdom’s 77 provinces now inundated. Hundreds of companies with production facilities in Thailand, including MNCs such as Canon, Toshiba and Western Digital, have been forced to suspend operations

In the Hi-Tech Industrial Estate in Ayutthaya province, Thailand’s production hub and one of the worst-hit areas, Singapore-list-ed Chosen has had to stop work at its factory as the industrial park has been cordoned off. With the first floor of its plant submerged in water, Chosen has moved some manufacturing tools and materials to Singapore to carryout production. Chow is unable at this time to determine the extent of the damage, as the company has no access to the plant. Output from the factory accounts for about 15% of Chosen’s overall revenue.

Chow’s predicament is shared by Armstrong Industrial Corp’s CEO Gilbert Ong, who recently visited his company’s two factories in Ayutthaya’s Rojana Industrial Park 2 to checkout the damage. “It’s quite severe. The fall-out from the Japan earthquake was just over and then this has come. There’s nothing you can do about it,” Ong tells The Edge Singapore. “These two factories are not operation-al. The flood is so severe that even if you try to go in by boat, you can’t possibly do extensive checks.”


The factories are two of four in Thailand owned by Armstrong, which makes rubber and foam components for the electronics andautomotive industries. The remaining two, located in the nearby Prachinburi and Samutprakarn provinces, continue to function. Arm-strong has more than 100 workers in the two affected plants.

Chosen and Armstrong are among more than a handful of Singapore-listed companies have reported disruptions to their operations as a result of the floods. Others include Adampak, Beyonics Technology, Broadway Industrial Group, Innovalues and Thai Beverage. Most have insurance protection for their equipment and plants.

Some of these companies supply parts to major vehicle manufacturers such as Honda and Toyota, which have also temporarily suspended production in their own plants in Thailand. Some of them also manufacture components for global hard disk drive (HDD)producers Seagate and Western Digital 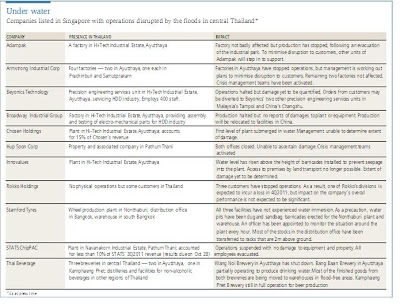 Besides companies in the manufacturing sector, some in the services industry have also been affected. A spokesperson for Singapore Airlines says “a small number” of customers has deferred their travel plans to Bangkok. Despite being surrounded by flood-hit provinces that are home to manufacturing companies from around the region, Bangkok has so far been sheltered by an elaborate sys-tem of flood walls, canals, dikes and under-ground tunnels.

Still, the Thai government has downgraded its economic growth estimate for 2011 to 3.7%from 4%, and warned that reconstruction efforts could cost more than THB100 billion($4.1 billion). The GDP forecast is expected to be reduced further if Bangkok, which ac-counts for about a quarter of Thailand’s economic output, gets hit

With the country being the world’s largest manufacturing centre for HDDs and an important base for auto production, the ramifications for industries and companies can be significant. For many of the Singapore manufacturers, which are still bracing for currency fluctuations and a softening in consumer confidence, the floods could not have come at a worse time.

“[The floods] will definitely have an impact on our 4Q performance,” Armstrong’s Ong says. “We simply can’t do much more than what we have already said we will do.” Thailand was Armstrong’s third-largest market in 1H2011, accounting for 25.7%, or $28 mil-lion, of the total $109 million revenue it generated between January and June

For Broadway, prospects in 4Q2011 also appear dim. Its output for the quarter could be hit, as its factory in Ayutthaya has stopped operating, even though the HDD maker is making arrangements to temporarily relocate production to its China facilities to avoid disrupting customers’ orders.

Broadway has already warned that it would slip into the red in 3Q2011 as a result of un-realised foreign-exchange losses. Like Arm-strong, Broadway has been a victim of sharp currency swings in recent months as it books revenue in the US dollar. Broadway’s 3Q2011results are due on Nov 2.

Not surprisingly, analysts have slashed their earnings estimates for some of these Singapore manufacturers. “Because the floods are hitting an industry in which there is al-ready some weakening in demand, businesses may take the opportunity to write off the quarter,” says CIMB Research economist Song Seng Wun.

DMG & Partners Research expects Armstrong to be the hardest hit among Singapore companies in the technology space. It has down-graded the stock to “sell” from “buy” and lowered its price target to 21 cents from 35 cents after cutting its earnings estimates by 29.4%for FY2011 and 23.1% for FY2012.

For Broadway, which DMG rates a “sell” with a 32-cent price target, a slowdown in the HDD business is expected to deal a major blow as the company derives more than 70%of its revenue from this segment. “A fall in expectation of HDD shipments would reduce Seagate and Hitachi’s production volume and eventually pull down Broadway’s numbers,” DMG says.

Among companies in the HDD space, DMG prefers Adampak, which makes industrial labels and radio-frequency identification tags. “Its labelling and die-cutting business can be easily modified to cater for the growing demand in [media] tablets and solid-state drives. In contrast, Armstrong and Broadway are not as flexible.” With nearly all its revenue and about 80% of its costs denominated in the US dollar, Adampak is also less exposed to the re-cent currency fluctuations, says DMG, which has a “buy” rating and a 33-cent price target on the stock.

Overall, though, a disruption to the regional supply chain appears inevitable. “There will be an impact on production and exports within the quarter. Hopefully, the impact will be confined within the quarter, as we saw with the fallout from the Japan quake,” says CIMB’s Song. “The silver lining is that the supply disruption may not be some thing that may leave a big dent as far as consumers’ pockets are concerned, given that the electronics sector is already heading towards a soft patch.”

Meanwhile, the impact on Singapore-list-ed commodities suppliers is yet evident, al-though Thai officials have said rice production in the kingdom has been hit and sugar harvesting would be delayed. Rubber shipments have also been pushed back, with the floods hampering warehousing arrangements. Companies that deal with such commodities include Wilmar International and Sri Trang Agro-Industry.