The STI backed off in the past 2 sessions at the 3200-mark and just 50pts shy of our stated near-term resistance at 3250 as the recent rally pauses ahead of tonight’s US job numbers and ahead of next week’s Singapore 3Q GDP estimates. Consensus calls for GDP to rise 10.8% yoy but show a 15.6% decline qoq as growth moderates to a more sustainable longterm pace following the stellar 1H growth rates.

Technically, we see STI’s rising trend intact with support at 3135 that is near the 15-day exponential moving average. The benchmark index should continue to outperform the G3 equity indices due to liquidity inflows. Our economist believes that liquidity injection from quantitative easing (more ahead with QE2) and currency intervention in G3 has been finding its way into Asia in recent months and this trend should continue in the months ahead. Technically, local bank stocks should underpin the STI as these have been index component laggards YTD.
Posted by KFC1973 at 10:30 AM No comments:

OCBC: Starhill Global is our pick among the retail REIT

Starhill Global is our pick among the retail REIT. The four Retail REITs trade at an average forward-yield of 5.7% and price-to-book of 1.04x. On valuation grounds, our top pick is Starhill Global because it trades at a significant 33% discount-to-book vis-à-vis the meager 2% by the broader S-REIT sector. We believe this discount is unjustified considering Starhill's high-quality assets, healthy balance sheet and strong sponsor.
Posted by KFC1973 at 4:39 PM No comments:

China Taisan’s TDR did well, limiting up 7% to S$0.275, which is 22% higher compared to yesterday’s closing price here. According to Bloomberg, the stock trades at a rather attractive 5.2x FY10F and 4.8x FY11F earnings. Technically, China Taisan shares’ non-action yesterday could be due to potential near-term overhang but by observing the volume of shares traded on a daily basis, this overhang should be depleted before the end of the current session. Although not fungible, traders should expect a positive reaction above the near-term high of 24cts. The TDR has limit up again today in Taiwan, equivalent to S$0.295.
Posted by KFC1973 at 11:04 AM No comments: 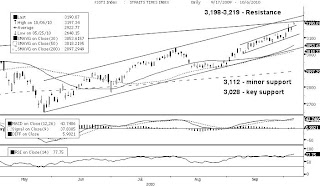 The STI’s uptrend is still very much alive after yesterday’s positive close, with no signs of any reversals. However, RSI is now overbought and a minor pullback could take place. Yesterday’s gap of 3,162-3,182 is an important short term support. If prices fall back below this gap, it would mean that the gap was an exhaustion gap, signaling that a deeper correction towards 3,112 and 3,028 is likely. Until then, prices should continue to edge higher to test the cluster of resistance trend lines at 3,198-3,219.
Posted by KFC1973 at 9:36 AM No comments:

Email ThisBlogThis!Share to TwitterShare to FacebookShare to Pinterest
Labels: SG_Market 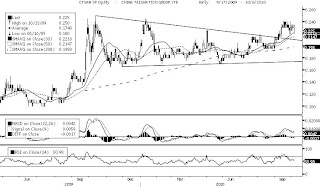 • The stock has been trading within a tight band since breaking out of its 10- months consolidation triangle. We expect the breakout run to continue once this pullback ends.
• Its momentum indicators suggest that it is in a short term consolidation mode before the next leg higher takes place.
• Prices could soon test S$0.245-0.25 and possibly even S$0.29-0.30 next. Place a stop below S$0.21 or below S$0.195 depending on one’s risk tolerance levels.
Posted by KFC1973 at 9:35 AM No comments:

• In the morning we mentioned our views on the impacts of China’s property market on the shipping industry. We see a potential boost in steel and iron ore demand from the Chinese government’s focus on affordable public housing for the masses.

• We are OVERWEIGHT on containers but NEUTRAL on dry bulk and UNDERWEIGHT on tanker shipping.

• For the tanker shipping sector, our top pick remains as BLTA. We like the chemical tanker for attractive valuations (0.4x P/B despite having a relatively strong expected ROE of 9.2%). BLTA has also achieved a small core net profit of US$1.1m in 2Q10, and we expect results to improve from stronger investment income in 2H10.
Posted by KFC1973 at 4:59 PM No comments: 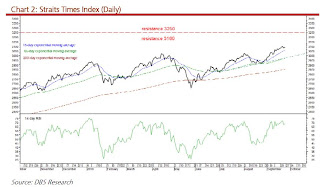 We maintain our 3160 upside objective for the STI. The index has been maintaining above its 15-day exponential moving average (currently at 3075), indicating that the short-term rising trend is intact. Neither the 14-day RSI (currently reads 64) nor the daily stochastics (currently reads 54) are overbought at the moment.

Anticipation about the 3Q reporting season and the likelihood that the current interest in equities can extend till the launch of the 19 overseas ADRs on October 22 should see the STI testing the near-term resistance at 3160. If strength extends beyond that, the next technical resistance is at 3250. We peg shortterm support at the 15-day exponential moving average, currently at 3057 and still rising. Below that, the next technical support is at 3025
Posted by KFC1973 at 2:35 PM No comments:

We expect the liquidity driven rally to continue into 4Q10 with big cap cyclical stocks to outperform small caps and defensive dividend yield stocks. There are 2 ways to play this rally. For the more aggressive investors, trade on the big caps for another 10%-20% gains. And for the more conservative investors, top slicing of existing exposure to big caps as the market trends higher before buying on weakness and laggards.

For our top picks, we remove dividend yield stocks such as Maxis, YTL Power and Star. For medium term prospects, we like Maybank, SapuraCrest and Parkson. While we continue to have buy calls on Axiata and Media Prima, we replace these with Tenaga, Genting, Gamuda and AirAsia to ride the liquidity rally.

Maybank has continued to show improved earnings following the disappointment of a massive impairment charge in FY09. Earnings CAGR of 11.6% over the next 3 years is expected to be supported by strong loans growth, particularly from Indonesia. Maybank still trades below mid-cycle valuation and is under-owned by foreign investors. Current foreign shareholding level of 13.2% is lower than CIMB (36.6%) and Public Bank (26.6%). It is also significantly lower than the previous peak foreign shareholding level of 22.8% seen back in 2007.

Tenaga Nasional is likely to be re-rated by (1) 1-for-4 bonus issue, (2) renegotiation with first generation IPPs to lower capacity payments, (3) securing 20% stake in the 1,500MW gas fired Dairut IPP in Egypt, and (4) fuel tariff adjustment by year end as part of the subsidy rationalisation programme.

Genting will benefit from expanding Singapore’s casino market via Genting Singapore and Genting Malaysia’s possible introduction of table games at the Aqueduct. Valuation is not overtly demanding during a liquidity driven rally.

Gamuda is expected to benefit from increasing news flow on the award of LRT extension and MRT. Gamuda which has been a favourite among foreign investors continue to be under-owned by foreign investors.

AirAsia is benefiting from stronger passenger traffic growth amid stable fuel cost and strengthening MYR. These translate into revenue expansion and lower fuel cost going
forward. Earnings CAGR of 19.1% expected over the next 3 years. Despite share price rising 25.6% over the last one month alone, CY11 P/E of 8.7x is still undemanding when compared to Tiger Airways which currently trades at 14x CY11 P/E. AirAsia is a prime beneficiary of strong foreign net inflows as it has traditionally high foreign shareholding levels at more than 40%.

SapuraCrest has one of the strongest orderbooks within the oil & gas sector due to the award of the 11 PSC umbrella jobs which spans 5 years and will contribute some RM1.5bn in revenue per annum. Given recovering job flow in the industry and several new deepwater fields slated for development, we do not see SapuraCrest running short on jobs. The group is now in a net cash position which would allow them to gear up for M&A opportunities
Posted by KFC1973 at 11:14 AM No comments: 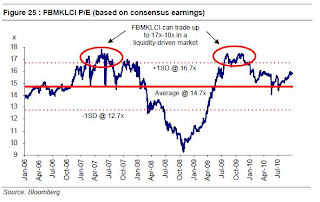 Looking at the P/E trends of the FBMKLCI since 2006, the average P/E is 14.7x and 1x standard deviation above average is 16.7x. The FBMKLCI is currently trading at 14.6x CY11 earnings (based on ECM Libra estimates) which means that it is fairly valued at current levels. However, in a liquidity-driven market as seen in 2007 and early 2009, the market P/E can expand to the 17x-18x level.

Market earnings growth is expected to trend downwards from 22.9% in CY10, which is being boosted by a low base effect in CY09, to 16.0% in CY11 and 10.5% in CY12. At CY11 P/E of 14.6x, Malaysia is the 2nd most expensive among its Asian peers and just behind India. While CY11 earnings growth of 16.0% is decent, it lags behind that of India, China, Indonesia and Thailand. Dividend yield is decent at 3.3%, just behind Australia and Taiwan. We hold a neutral view on the market by ascribing a 15x mid-cycle valuation on CY12 earnings to derive end-2011 FBMKLCI target of 1,650, implying 12.6% upside from current levels. However, should the current liquidity-driven rally continue into 2011, end-2011 FBMKLCI could potentially touch 1,870 based on 17x P/E and the upside will increase to 27.6% from current levels. However, we do not expect that valuation to be sustained especially if such valuation is reached in the early part of 2011 while the pace of corporate earnings growth is expected to slowdown. During the past 2 cycles when market valuations exceed 17x, “corrections” set in within 6 months either by falling prices or earnings upgrades. Our existing end-CY10 FBMKLCI target of 1,480, which is based on 15x P/E, could easily be breached in a liquidity driven market. By ascribing17x P/E, the FBMKLCI could potentially hit 1,680 by year end. Should that happen, we expect some correction before market takes off again in the later part of 2011.
Posted by KFC1973 at 11:11 AM No comments: 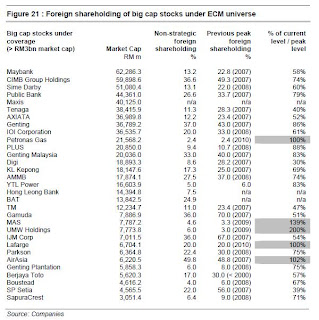 ECM-The market was driven predominantly by banks, Genting, and telcos in 3Q10 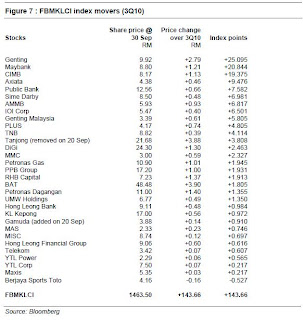 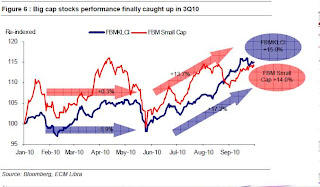 Locally, the first half of 2010 saw strong passenger traffic as a result of improved demand for air travel. Passenger traffic and capacity (ASK) in 1Q and 2Q 2010 have surpassed prerecession levels. We expect higher traffic volume to continue flowing into the traditionally stronger 2H, thus boosting load factor and yields.

Operational statistics for Malaysia Airlines’ (MAS) in July and August 2010 have reconfirmed our bullish outlook on the sector where the combined figures for July-August are already higher than those of 1H10. Increased aircraft utilization and productivity due to better demand should contain costs. Jet fuel price has been fluctuating relatively stable between USD75 and USD88 per barrel for the past 12 months.

We do not expect prices to go beyond this range in 4Q10, and therefore a rise in operating costs should be minimal. The strength of MYR, which has gained 10.4% against USD, is positive on airlines as fuel cost in MYR term will be lower.

Email ThisBlogThis!Share to TwitterShare to FacebookShare to Pinterest
Labels: Aviation, MAS (MY) 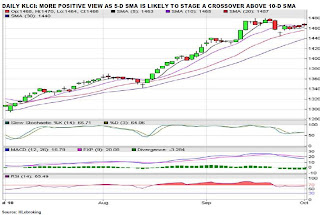  Despite ongoing consolidation, the medium to long term outlook of Bursa Malaysia remains bright, supported by local and institutional funds that were attracted by the promising outlook for the ringgit given the widening interest rate gap with developed nations.

 Expectations of more measures to boost the economy from the upcoming Budget 2011 and NEM2 announcements could provide some boost but may be short-lived.

 Technically, the positive crossover in the daily slow stochastic indicators and the impeding positive crossover of the 5-d SMA above the 10-d SMA could signal more upside for the market and cushion more severe correction ahead.