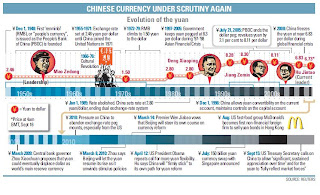 THE Obama administration is signalling that it plans to take a tougher stance with China on trade issues,including demanding that Beijing moves more quickly to reform its currency system.

As part of that new approach, the administration filed two new trade cases against China before the World Trade Organization, and Treasury Secretary Timothy Geithner said China must move faster to allow its currency to rise in value against the dollar.

In testimony prepared for two congressional hearings yesterday, he said: “We are very
concerned about the negative impact of (China’s economic) policies on our economic interests.”

On Wednesday, United States Trade Representative Ron Kirk announced that the administration was filing two new trade cases against China before the Geneva- based WTO, which oversees the rules of global trade.

In one of the WTO cases, the administration said China was discriminating against US creditand debit-card companies in favour of a state-owned financial- services firm.

The other case contended that China had improperly imposed trade sanctions on a type of US-made flat-rolled steel used in electric transformers, reactors and other types of power-generating equipment.

In Beijing, Chinese government officials said there would be no immediate reaction to the new trade cases or to Mr Geithner’s comments.

Up until now, the administration has declined to label China a currency manipulator, a designation that would trigger talks between the two nations and could lead to trade sanctions if the US won a case against China’s currency policies before the
WTO.

。"地心引力"指标随时发生变动，它能帮助大家看清这个股市究竟是在高位还是低位区域。
Posted by KFC1973 at 2:30 PM No comments:

Email ThisBlogThis!Share to TwitterShare to FacebookShare to Pinterest
Labels: 胡立阳 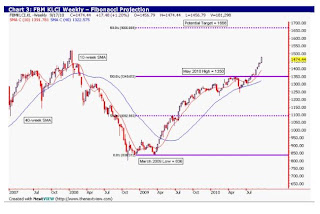 ♦ With a confirmation candle registered at above the 1,450 level yesterday, the FBM KLCI has also confirmed an extension mode of the current uptrend.

♦ As reiterated in our Daily Trading Strategy reports, the next effective resistance level is only seen at 1,524.69. But, given the solid breakout momentum and the improved daily turnover in recent sessions, the buying support is expected to persist momentarily.

♦ Should the current uptrend be maintained at above the 1,390 – 1,400 support region, and the FBM KLCI manages to surpass the all-time high level of 1,524.69 with powerful buying support on the core bluechips, we are of the view that the Fibonacci Projection level of 1.618x target at 1,668 can be reached in the medium term.

♦ As a result, we reiterate our bullish technical outlook on the FBM KLCI for short-, medium- and long-term periods, and foresee a Stronger Technical Bull Run underw ay!
Posted by KFC1973 at 2:00 PM No comments: 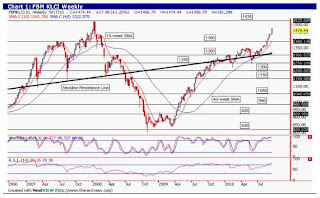 ♦ As the index moved higher near the Extended Neckline Resistance region near 1,250 – 1,300 in late 2009, profit-taking activities were stiff, as investors in general, betted that the rally could come to an end for a serious correction phase.

♦ However, after months of struggling near the Extended Neckline Resistance, the FBM KLCI managed to secure its position at above the Neckline, with the 10-week SMA beginning to turn upward in Jul 2010.

♦ Technically, a positive reversal on the 10-week SMA at above the 40-week SMA near the Neckline Resistance indicated a likely extension of the more-than-one-year old uptrend on the FBM KLCI.

♦ Following the successful breakthrough of the critical resistance zone of 1,390 – 1,400, the medium-term outlook of the FBM KLCI has turned more bullish.

♦ Given the four positive weekly candles in the last five trading weeks, the index is poised to revisit the 1,524.69 all-time high level soon, in our view.

♦ So long as the index sustains at above the 1,390 – 1,400 support region, its medium-term outlook will remain firmly positive and the current uptrend is likely to persist.

♦ Given the steady uptrend since Mar last year, the FBM KLCI has been lifted successfully back to above its Long-term Uptrend Line (UTL) in late 2009, as shown in Chart 2 above.

♦ As it moved past the 1,250 key resistance level in late 2009, the 10-month SMA has cut above the 40-month SMA nearby 1,150. This technical change indicates a fresh extension of the long-term uptrend on the FBM KLCI.

♦ To date, the index has recorded four consecutive positive candles on the monthly chart, suggesting an imminent retest of the all-time high level at 1,524.69 soon.

♦ Chances are if the momentum continues, the index is likely to see a fresh all-time high level in the next few months.

♦ According to the chart, the long-term support level for the index is seen at between the 1,150 and 1,250 region. This also means that even with a sharp correction from the current level, should the index remain firmly supported at above the UTL and the 1,150 – 1,250 region, its long-term bullish technical outlook will stay intact.
Posted by KFC1973 at 1:57 PM No comments:

Compelling from both yield & P/NAV perspective

Shoppes cannibalization fears overdone. New retail space at The Shoppes at Marina Bay Sands has begun to open. We believe cannibalization concerns for retail landlords such as Starhill Global REIT may be exaggerated as 1) Orchard Road is likely to remain a key shopping destination in its own right; 2) the product range / price tiers available in, for instance, a Chanel store in The Shoppes and one in Takashimaya are expected to be fairly different. In fact, the increased tourist arrivals led by the re-making of Singapore should more than offset such concerns, in our view. Driven by new attractions such as the Integrated Resorts, visitor numbers have jumped 23% YoY to 6.6m arrivals in the seven months to Jul.

Singapore retail still a key component. We are positive on the retail property sector not only as tourism and increasing consumer confidence drive spending, but also relative to the residential sector, which has significant policy overhang. We note that while Starhill is classified as a diversified REIT, about 66.4% of its asset value stems from Singapore. In addition, we estimate that Singapore retail contributes roughly 51.9% of Starhill's FY10F gross revenue and 47.6% of FY11F gross revenue (the slight dip reflects the full-year contributions from the recent Malaysia and Australia acquisitions).

Compelling from both yield and NAV perspective. Market chatter on S-REITs has been primarily focused on the high yields relative to benchmarks including the 10-year government bond yield. Starhill certainly delivers on this front with estimated FY10F and FY11F yields of 6.6% and 6.8%. This is just a tad shy of the S-REIT sector average of 6.8% (FY10F) and 7.0% (FY11F). But what makes Starhill particularly compelling to us is that it trades at a significant 35% discount to book value vis-à-vis the meager 4% discount-to-book offered on average by the broader S-REIT sector. We believe this discount is unjustified considering Starhill's high-quality assets, healthy balance sheet and its strong sponsor.

Valuation. Our DDM-derived fair value estimate of S$0.65 (6.7% discount rate, 0.5% terminal growth rate) is intact; this is equivalent to a fairly reasonable (in our opinion) 0.72x priceto- book. With an estimated total return of 17.7%, we maintain our BUY rating on Starhill. Starhill is also one of our top picks for the S-REIT sector. Key risks to our view include macroeconomic headwinds, foreign exchange risk and changing regulatory and taxation regimes. 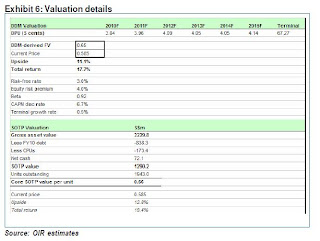 • Small companies, big value. The performance of our small-cap universe in the recent reporting season was not as impressive as in the previous quarter. A third of the 18 small caps which announced their quarterly financial results in Aug failed to meet our expectations, up from only 16% for 1QCY10. Share price wise, the F&B and packaging stocks are the top performers YTD while rubber glove companies are the biggest losers. Small-cap stocks still offer great value as they are trading at an average CY11 P/E of only 8.5x, a 40% discount to the KLCI’s 13.8x P/E. We continue to OVERWEIGHT the small-cap sector. Our core top picks are in sectors that enjoy steady earnings growth such as rubber glove, plastic packaging and F&B.

Latexx Partners replaces Wellcall Holdings as our top pick among the small caps. 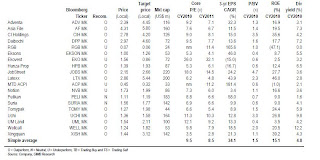 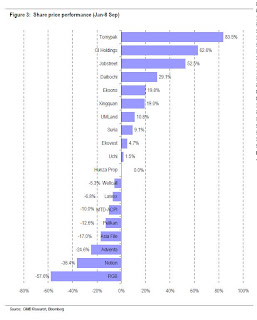 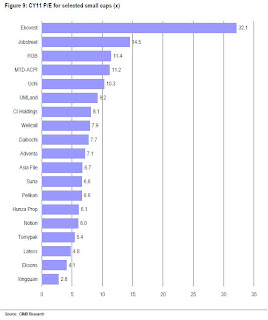 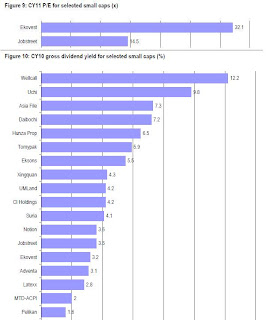 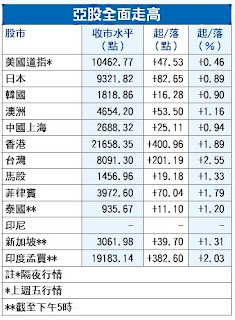