Mushrooming Earnings
After meeting with management and analyzing DXN’s 1QFY11 results which showed RM10m in net profit, we are convinced that the company is likely to register record earnings and significantly cut its net debt, or possibly end up with net cash this year. The new strategies adopted by management in the last 18 months are starting to yield encouraging results from FY11. With a stronger free cash flow, DXN is expected to achieve a 40% dividend payout ratio and pay quarterly dividends. DXN, which has a relatively low capex MLM business selling somewhat recession-proof products (e.g. food & beverage, health food supplement, personal care), is currently trading at a 40% discount to the other MLM companies such as Zhulian and Hai-O. Its share price is now trading at its FY11 book value / share of RM0.91.

New strategy. In Nov 2009, DXN revised 3%-5% higher the selling prices of its major Ganoderma products, which could increase margins post 1QFY11 as it normally keeps 2 months’ worth of stocks. Operationally, DXN is making efforts to reduce its manufacturing costs (98% of MLM sales is from its own manufactured products), namely by lowering cost of key raw material such as coffee powder through bulk purchasing and increasing manufacturing automation. Most of its RM10m FY10 capex is for the automation initiative. Elsewhere, DXN has been reducing its net debt from RM79.5m in FY08 to RM37.5m as at 28 Feb 2010. It has just made early settlement of its RM50m collateralized loan obligation. Going forward, management will deploy its financial resources towards growing its Ganoderma core business, and not diversify into other businesses like in the past.

Solid financial track record. DXN’s revenue has been growing since at least FY03 before being disrupted by the economic recession in FY10. In spite of this, its FY10 revenue was down by only 6% although earnings soared by 40%. Since FY05, DXN has been recording earnings of RM19.5m to RM28.4m. With organic growth from its existing markets and penetration of new markets such as Mexico, Peru, Chile, Hungary, Poland, etc and better profit margins, the company is expected to post record earnings in FY11.

5x FY11 PER and 40% dividend payout. DXN’s FY11 PER is cheap compared to other MLMs, consumer or small-cap stocks. Pegging a 9x FY11 PER, which is its historical 7- year average high PER and in line with that of its peers’ valuations, we derive a fair value of RM1.50. This price is fair because: (i) it has a strong 42.3% FY11 EPS growth, (ii) its balance sheet is stronger than previously, (iii) it is now more profitable, (iv) it has a solid financial track record, and (v) sells somewhat recession-proof products. As a result of cost savings from manufacturing efficiency, lower finance cost and higher profit margin – which in turn boosts its free cash flow - DXN is expected to start paying quarterly dividends and make a 40% dividend payout based on management guidance. A 4% less 25% tax and 4% tax-exempt first interim dividend per RM0.25 ordinary share has been declared for FY11. 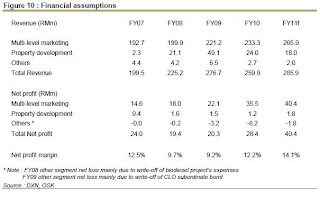 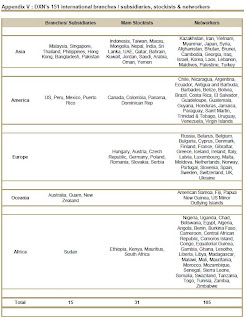 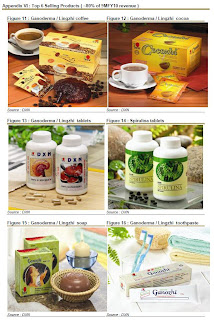 Strong MLM to drive earnings growth
§ DXN’s revenue is envisaged to grow by about 10% in FY11 to RM290m, underpinned by: (1) Rising consumerism in the region; and (2) Greater market reach via its expanding distributor/stockist network. §

Despite rising commodity prices and operating costs in general, DXN is able to sustain its margins due to its strategy of: (1) Improving productivity and cost efficiency via process automation; and (2) Moving upstream to produce some raw materials at cheaper cost.

§ Without further provision for diminution of investment in CLO, sustained margins and lower effective tax rates, FY11’s earnings are expected to grow at 42% to RM40m.

§ Management is committed to stay focus on its core business activities, improving cost efficiency to enhance profitability and higher dividend distribution. Thus, with rising profit, FY11 total dividend could rise to 7-8 sen vs. expected distribution of 3.5 sen in FY10.


Forex risks are well-managed
§ About 85% of DXN’s MLM sales are from the overseas markets and mainly in USD. The strong RM would have a negative impact on overall earnings. To mitigate this, the company has a hedging policy whereby it will hedge forward at least 40% of its sales proceed for 6 months period. § Moreover, during the arrangement for the CLOs settlement, the management has taken a pro-active stance by converting the RM25m loan to US$ loan to enjoy lower interest rate and provide a naturally hedge to its overseas sales proceed.

Significant resistance ahead at RM1.05-1.10 zones amid overbought positions…
§ DXN had a major breakout above the DTL channel of RM0.60 in 2009 and later surpassed the neckline resistance of RM0.78 following the robust 1QFY11 results release on 28 July.

§ DXN’s share prices closed at a 6-year high of RM0.91 yesterday and are marching steadily towards the upper UTL channel of RM1.00.

§ A breakout above RM1.00 will signal more upside to the significant neckline resistance level of RM1.10, followed by historical high of RM1.30 (30 Sep 03). The upside is also supported by a bullish crossover of the 50-d SMA above the 100-d SMA.

….but mid to long term bright with 6-month technical target at RM1.36 after some consolidations
§ We like DXN for: (1) its current business structure of controlling and effectively managing the supply chain - upstream and downstream; (2) its strong foothold in the international markets and it is ahead in global expansion; and (3) stable and strong financial position, sound management and highly attractive dividend yield of 9.4% for FY11.

Our thoughts: We expect the acquisition to be mildly dilutive to its DPU given that the 8% net property income yield from this acquisition is slightly lower than its WACC of 8.3%. This acquisition will increase CREIT's AUM by 4% to S$958m. We view this as a non-event given the size of the acquisition. Maintain our BUY rating and TP of S$0.62, backed by its defensive business structure.
Posted by KFC1973 at 5:54 AM No comments:

Email ThisBlogThis!Share to TwitterShare to FacebookShare to Pinterest
Labels: Cambridge 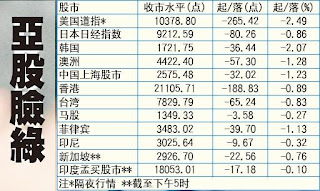 Key points for our OVERWEIGHT stance
> Government's emphasis on public transport, rural infrastructure and water supply
should underpin the implementation of mega jobs.

> 10MP should expedite the award of the remaining packages of key large-scale
projects which failed to regain momentum in the earlier part of the year.

> Strong likelihood that the construction sector could see in 2H10 a reversal of
the conditions in 2H09 when delays in project flows hammered investor sentiment.

> The drive for execution on part of the government as evident by the 10MP and NKRA
should somewhat address investors' concern over implementation risks. 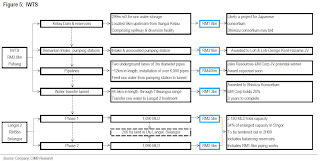 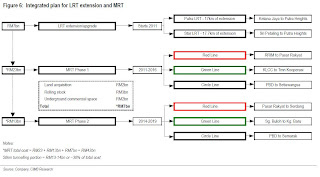 Email ThisBlogThis!Share to TwitterShare to FacebookShare to Pinterest
Labels: MY_Construction 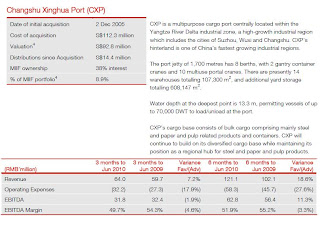 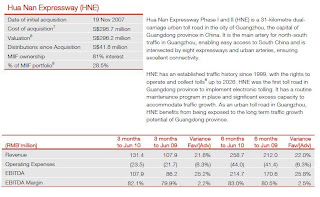 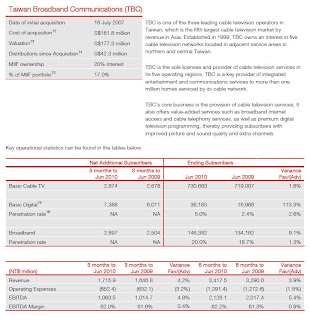 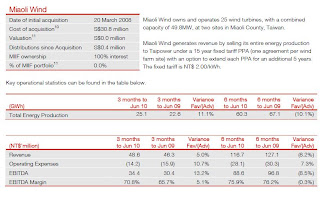 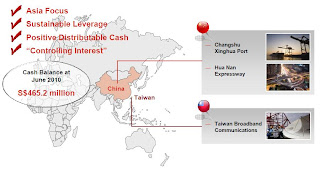 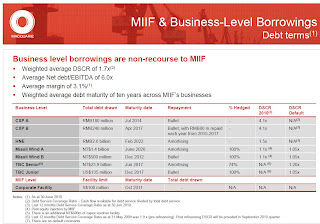 MIIF was the first infrastructure fund to list on the main board of the Singapore Exchange Securities Trading Limited (SGX-ST).

MIIF listed on the SGX-ST on 27 May 2005 and has over 8,200 investors, including retail investors and some of the world’s foremost institutional investors.

• The Fed signals further caution over the US economic outlook. The Fed cautioned that the economic recovery is likely to be more modest in the near term than had been anticipated. The pace of recovery in output and employment has slowed in recent months. Household spending remains constrained by high unemployment, modest income growth, lower housing wealth, and tight credit. The bottom line remains that growth outlook for the US looks weak going forward, reinforcing the Fed chairman, Bernanke’s recent remark that the US economic outlook is “unusually uncertain”, weighed down by a tepid job recovery while the housing market remains in doldrums. Bank lending has continued to contract.

• Fed ready to play hard if US recovery stalls. Given the gravity of the ongoing headwinds in the US economy and rising odds of a sputtering recovery in coming months, the Fed announced its plan to reinvest principal payments from agency debt and agency mortgage-backed securities into long-term Treasury securities and will continue to rollover its holdings as they mature. The purchase was seen as a move to keep the level of support it is providing to the economy by keeping its balance sheet constant at the current level. We think the Fed has other policy tools at its disposal to spur growth, which include:
(i) to engage in further debt purchases,
(ii) lower the rate it pays banks to park their excess reserves at the Fed, and
(iii) announce a suitable loan-to-reserve ratios for banks, which allow the banks to earn a yield on excess reserves instead of zero if they achieved the credit ratio. The Fed
repeated its pledge to keep rates “exceptionally low” for an “extended period” in an environment of subdued inflation trends and stable inflation expectations.

• Rate outlook maintained. With the still-uncertain economic outlook coupled with modest inflation pressures, we expect the Fed to keep rates low for some time until they see convincing signs of a self-sustaining recovery. As such, we maintain our outlook for the Fed funds target rate of 0.0-0.25% for 2010 and 1.25% for 2011.

Email ThisBlogThis!Share to TwitterShare to FacebookShare to Pinterest
Labels: FOMC, US Interest 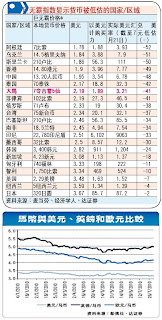 Email ThisBlogThis!Share to TwitterShare to FacebookShare to Pinterest
Labels: MY_Currency 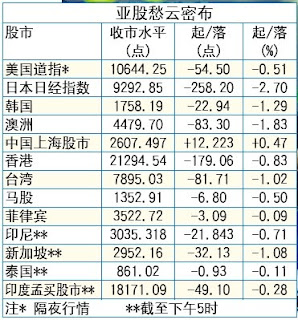