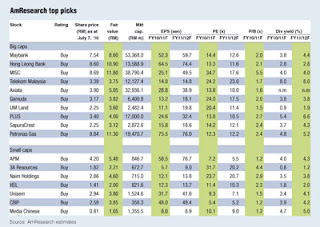 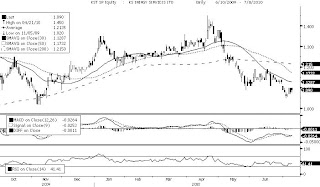 KS Energy Services (KST SP; S$1.09) – BUY
• The stock’s downleg from the S$1.45 high appears complete and a rebound is likely to take place next. 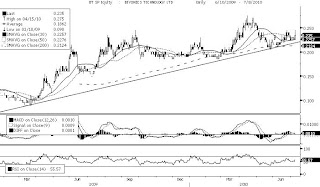 • There are no bearish divergences yet, suggesting that there is a good possibility that prices could nudge on higher from here. RSI is also forming a base above the 40-50pts levels, getting ready for another push.

Email ThisBlogThis!Share to TwitterShare to FacebookShare to Pinterest
Labels: Beyonics 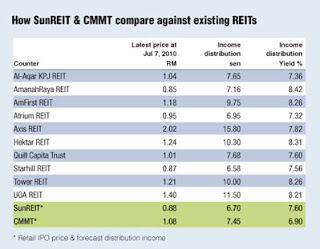 The Edge Singapore’s portfolio for 2010 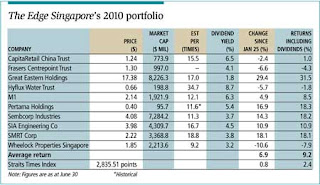 Email ThisBlogThis!Share to TwitterShare to FacebookShare to Pinterest
Labels: TheEdgePortfolio

Unfavourable perceptions dominate
Maintain OUTPERFORM and target price of RM3.00. While MAS CEO’s response to 10 questions sent in by readers of StarBizWeek did not shed any new light on MAS, what we found interesting was the rather critical attitude of the Malaysian public towards the national carrier. Some readers compared it unfavourably to SIA and questioned its competitiveness against AirAsia. There is little doubt that MAS is lagging behind SIA in myriad ways but all this is old news. MAS today will not be MAS tomorrow because the structural fleet renewal from end-2010 onwards has the potential to transform MAS inside out. Therefore, we continue to be bullish on MAS and retain our earnings forecasts. Our target price remains at RM3.00, pegged to an unchanged 6x CY12 core EPS. Potential re-rating catalysts include improved results in FY10 from the global yield recovery and the impending fleet renewal.


MAS’s standing vis-à-vis aviation big-brother SIA deserves a little extra focus. We will address the comparison against SIA in more detail in the next section. One reader rebuked MAS for airing its disagreements with AirAsia through the media. Tengku’s response was that when AirAsia X did not obtain the routes that it had asked for, it “started lobbying in the media and the digital sphere…It was then necessary to put our point of view out to the public, and rebut the allegations”. This suggests thatthe relationship between Malaysia’s two most important airlines has not improved. However, we observe that MAS appears to have gained a stronger voice and a more
sympathetic hearing from the present administration.

Another reader questioned the recent award of up to 11.9m additional share options to Tengku, to which the response was that it was an upgrade of the previous 2007 award to reflect Tengku’s promotion from CFO to CEO. Up to 31 December 2009, Tengku had already been granted 4.7m share options at exercise prices ranging from RM1.60
to RM2.55. The additional number of options granted will “depend on my (Tengku’s) performance, tied to the company’s KPI. In addition, the minimum exercise price was set at a 20% premium to the share price at that time…This is unusual, as many companies issue share options at zero premium or even at a small discount.”

The comparison with SIA
While there is no doubt that MAS is lagging behind SIA in myriad ways, all this is old news. MAS today will not be MAS tomorrow, because the structural fleet renewal from end-2010 onwards has the potential to transform MAS inside out. In his written response, Tengku recognised SIA’s inherent advantages as an airline as the latter was based in a global business hub. This naturally leads to Singapore having a bigger capacity to deploy more-lucrative business class seats compared to Kuala Lumpur. In contrast, economy-class leisure traffic forms the backbone of demand for MAS.

In recent quarters, the rebound in global business traffic and yields has been faster than the recovery of economy-class travel. According to IATA, “passenger numbers travelling economy class (in April) was down 6.5% (yoy), following a 7.4% expansion in the first quarter. Numbers travelling in premium class were still 1.1% up in April on
the previous year, following growth of 7.6% in the first quarter”. Against March 2010, the numbers were unfavourably affected by the eruption of Iceland’s Eyjafjallajokull volcano.

The strength of the business class recovery is being reflected in the upward sequential movement in SIA’s passenger yield over the past two quarters, against a rather flat MAS yield. In addition, MAS’s passenger load factor is holding around 75% whereas SIA is higher at around 80%.. SIA has been profitable for the past two quarters after spending two quarters in the red, whereas MAS has been unprofitable for five consecutive quarters

SIA currently has an average fleet age of 6½ years while MAS’s fleet age is double that at 13 years. The average age of MAS’s fleet will fall to 8½ years by end-2012 based on the existing delivery schedule, which will make MAS considerably more competitive against best-of-breed SIA.

Valuation and recommendation
Maintain OUTPERFORM with unchanged earnings forecasts and target price of RM3. When we turned bullish on MAS in March, there were only three buy calls (including our own) and eight sells. Our last check on Bloomberg showed six buys and six sells, neutral calls excluded. We believe that the global aviation recovery will help MAS turn a small core net profit in FY11 before registering more significant profits in FY12 on the back of the new aircraft deliveries. Further analyst recommendation upgrades will follow, in our opinion.

As a result, MAS remains an OUTPERFORM and our preferred aviation pick in the region. Potential key re-rating catalysts include analyst recommendation upgrades, improved results in FY10 from the global yield recovery and a structural downward shift in the airline’s cost structure from FY11 onwards that will help to lift profit margins. We retain our earnings forecasts and our end-CY10 target price of RM3, which is based on 6x CY12 core EPS. However, we think MAS can eventually reach RM4 (P/E of 8x) over a two-year period. We have used CY12 earnings as it better reflects MAS’s true potential due to continuing core net losses in 2010 and shallow profits in 2011.
Posted by KFC1973 at 12:28 PM No comments: