KVMRT 2, expected to receive formal approval by end-2014, should create some excitement in the property sector but demand is unlikely to be as strong as during KVMRT 1.

Construction sector will be the immediate beneficiary while property projects with close proximity to MRT stations would enhance in attractiveness.

Remain Overweight on the construction sector and Neutral on the property sector. Our top picks are Gamuda (BUY; MYR5.30 TP) and Eco World (BUY; MYR6.59 TP).


What’s New
We hosted a group of institutional investors for a bus tour to the potential locations of the future KVMRT 2 stations recently together with mapping specialists, Mr Ho Chin Soon and Mr Ishmael Ho. We also visited three property projects along the way. These projects have received strong take-ups/are close to fully sold.

While the final alignment of the KVMRT 2 by end-2014 will likely create another round of buying on properties which are near to the new MRT stations, demand may not be as strong as during KVMRT 1 (in 2011) due to the affordability issue from interest rate hikes and GST implementation as well as stricter mortgage rules imposed by the banks. Maintain Neutral on the property sector. 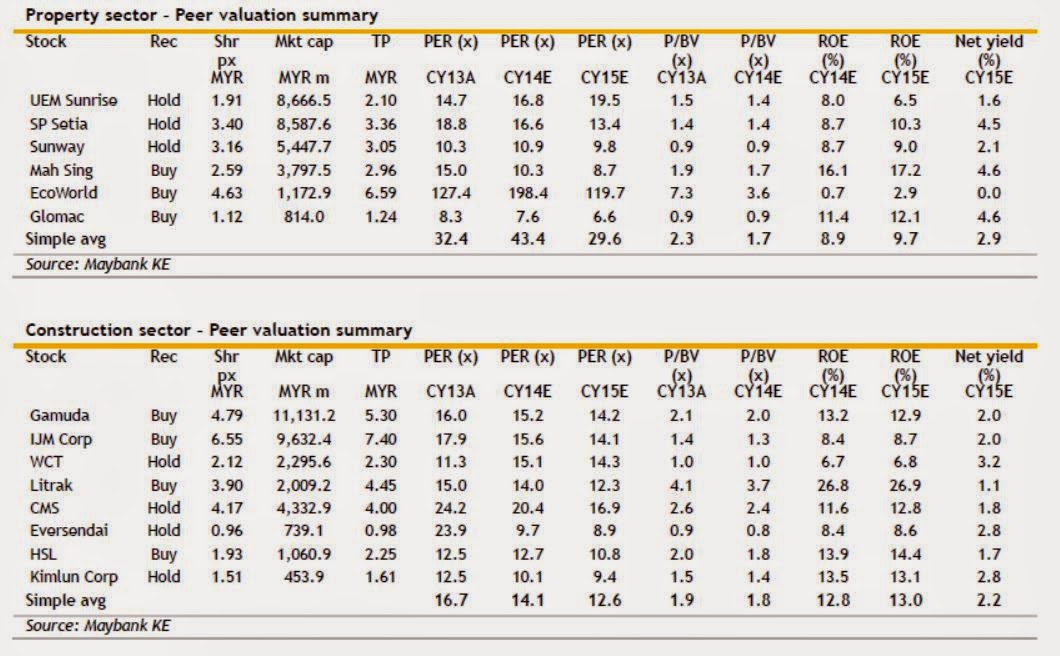 Our KVMRT2 bus tour on 21 August
We recently hosted a group of institutional investors for a bus tour to the potential locations of the upcoming KVMRT 2 stations together with mapping specialists, Mr Ho Chin Soon and Mr Ishmael Ho. During the bus tour, we also visited three property projects that have close proximity to the future KVMRT 1 and KVMRT 2 stations. They are:
a) YTL Land’s (YTLL MK, Not Rated) The Fennel at Sentul;
b) PJ Development’s (PJD MK, Not Rated) You City at Cheras; and
c) SP Setia’s (SPSB MK, HOLD; MYR3.36 TP) Dwiputra Residences at Putrajaya.

KVMRT 2’s formal go-ahead by end-2014
According to MRT Corporation, the Cabinet has approved the KVMRT 2 project worth MYR25b but has yet to formally announce it. The delay in the formal announcement is not a major concern to us as it is due to additional track alignment studies and cost analyses encompassing, among others, the project delivery partner (PDP) fees. Nevertheless, MMC-Gamuda (PDP for KVMRT 1, expected to clinch the PDP role for KVMRT 2) has started preliminary works on KVMRT 2 including alignment design, land acquisition and workers recruitment, we understand. The formal approval of KVMRT 2 is expected to be announced by end-2014.

During the bus tour, Mr. Ho stated that the final alignment of KVMRT 2 could be announced in a few months which coincides with the formal approval timeline. He also highlighted the importance of the circle line (KVMRT 3) in integrating KVMRT 1 and 2 as well as with the other public transport. In particular, the circle line is expected to pass through Bandar Malaysia (currently the Sg Besi airport) that is expected to connect the KVMRT with the proposed KL-SG High Speed Rail. 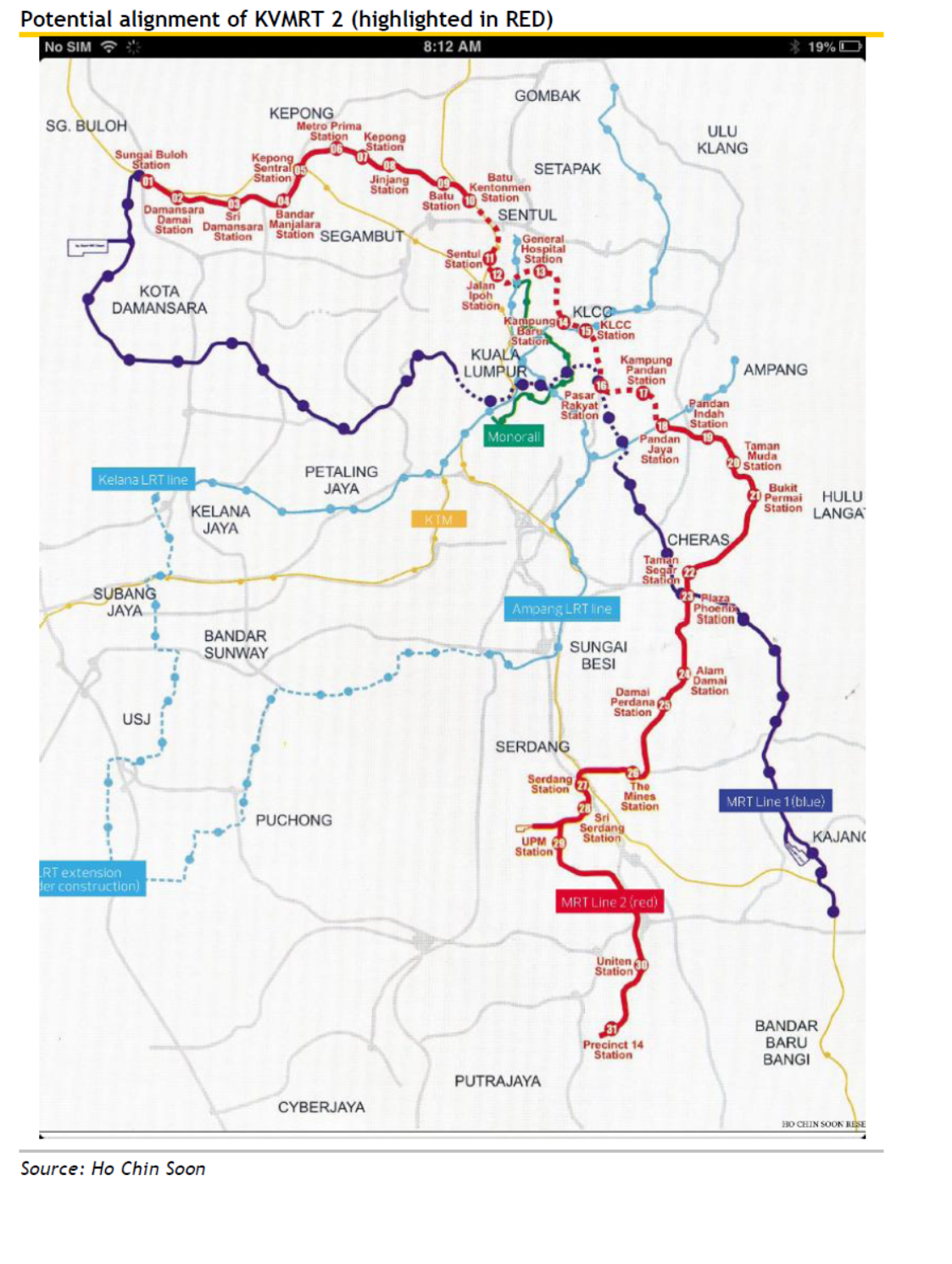 Strong take-up for property projects at KVMRT thus far
New property projects at close proximity to the KVMRT 1 and upcoming KVMRT 2 stations have thus far received strong take-up rates at record prices. Buyers have gone ahead with their purchases even before the launch of the KVMRT 2 or circle line. One of the YTL Land’s Sentul projects - The Fennel - was 100% (phase 1)/80% (phase 2) sold at record pricing of MYR700psf since the property launches in July 2013/Nov 2013 while SP Setia’s Dwiputra Residences in Putrajaya experienced a significant pickup in sales after the KVMRT 2 line was approved by the Cabinet.

As for PJ Development’s You City @ Cheras project (which has a direct linkage to “Suntek” MRT station under the Sg Buloh–Kajang (KVMRT 1) line, it has received strong take-ups of 70-100% for You Residences (phase 1; MYR500psf ASP) and You Vista (phase 2; MYR600-700psf ASP). PJ Development plans to launch You Place (phase 3; MYR800psf) by end-2014. Projects with close proximity to MRT stations normally fetch 20-30% premium prices, we understand. 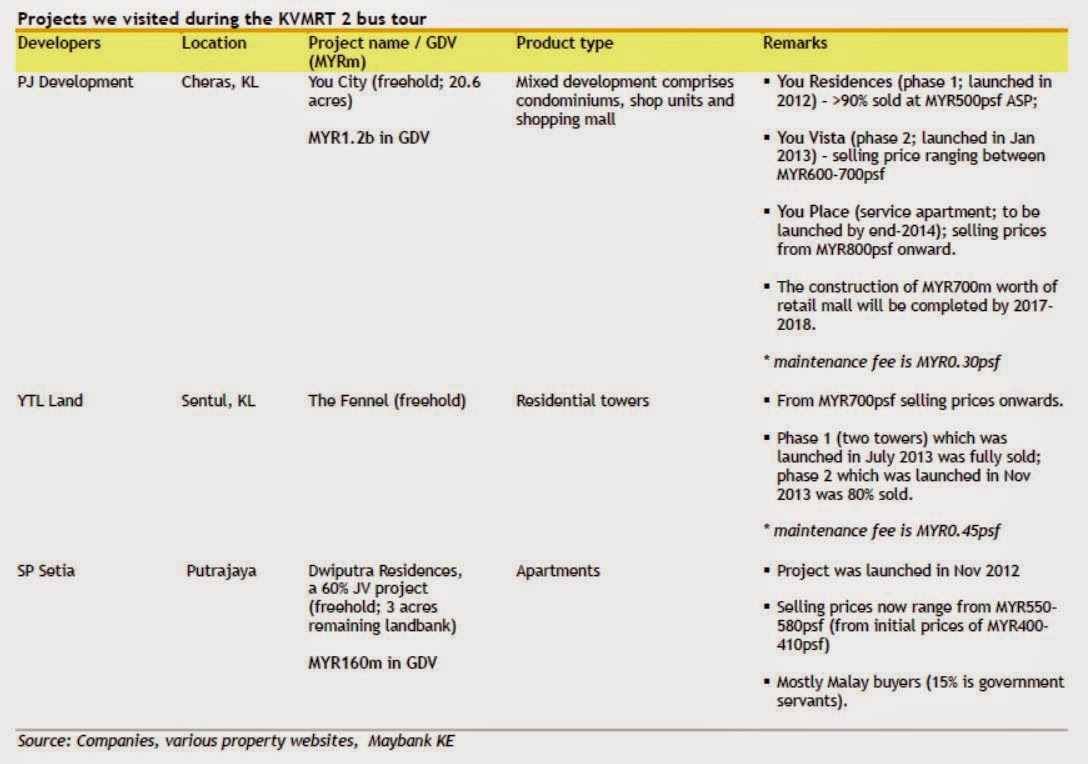 Property demand will likely be under pressure
While the announcement of the final alignment of the KVMRT 2 by end-2014 will likely create another round of buying on properties which are near to the new MRT stations, demand may not be as strong as during KVMRT1 (the alignment was announced in early 2011) due to the affordability issue from interest rate hikes and GST implementation as well as stricter mortgage rules imposed by the banks.

Housing affordability is an issue today and property demand could weaken further with higher interest rate and higher property prices on GST-related re-pricing/re-costing exercises. Our study reveals that the affordability index has been trending down since 2009 after the hikes in the BLR (was revised up by +25bps to 6.85% in July 2014) and higher property prices (+12.5% CAGR versus income growth of +6% between 2010-2013). This would impact investment decisions for new purchases and could eventually lead to a further decline in property sales

Our ongoing discussions with the bankers revealed that the loan rejection rate has been as high as 40-50% nowadays (depending on product types; affordable housing which is dominated by first-time buyers has lower loan rejection rate, we were told) compared to 10-20% a year ago. Discussions with the property sales staffs during our KVMRT 2 site visit also revealed that most of their buyers are investors (vs. for home stay), except for the Dwiputra Residences project where most buyers are government servants.

We remain NEUTRAL on the property sector. Key risks are further tightening measures and interest rate hikes which do not seem to be reflected in current stock valuations just yet. Presently, property stocks under our coverage are trading at 0.47-0.70 multiples to our RNAV estimates. Our top BUY pick is Eco World.
Eco World (BUY; MYR6.59 TP). We like Eco World for its strong management team who has a proven track record. With well-planned products at the right locations, all of Eco World’s property launches have received remarkable take-ups. 7M 2014 locked-in sales were MYR2.14b, exceeding its FY14 sales target of MYR2b. Rerating catalysts include RNAV-accretive land deals. Eco World is still aggressively seeking land acquisitions. It has thus far (since it announced its restructuring exercise at end-April 2014) announced two land deals – Bukit Bintang City Centre (in the stage of finalising the JV’s terms and conditions) and EcoForest in Semenyih with potential combined RNAV enhancement of +36-41sen/shr.