Small-cap stocks in Singapore have had a tough time ever since shares in Asiasons Capital, Blumont Group and LionGold Corp collapsed last October. The fallout has even taken a toll on the overall trading activity in the local market, as seen from the lacklustre daily securities turnover and volume over the past half year. But if Terence Wong of DMG & Partners is to be believed, the tide is set to turn for some small caps in the foreseeable future.


His reason for optimism? The current valuations of stocks tracked by DMG are simply too good to ignore, especially considering their fundamentals are largely still intact and even likely to improve. “I think, and I believe, that investor appetite will actually return and return in a big way when it comes to small caps,” Wong, DMG’s head of research, told an audience of fund managers and institutional investors at a recent event to introduce his research team’s top 25 small-cap picks for 2014.

“For the small caps under our coverage, we are looking at price-earnings ratios of under 10 times. But look at the growth. Earnings for many of them are growing at 20% to 25%,” he notes. In contrast, blue chips are trading at about 14 times earnings and delivering earnings growth of 13%, he adds.

Of DMG’s 25 stocks, 12 of them are from the construction and oil and gas sectors. Its favourites in the construction space include Lian Beng Group, Yongnam Holdings, King Wan Corp and ISOTeam, a relatively new market entrant that made its trading debut last July.

SINGAPORE’S ‘NATIONAL BIRD’
“I believe very much that there is going to be a multi-year construction boom,” says Wong. “Cranes are going to be the national bird of Singapore. You see them popping up everywhere. There are a lot of public projects that will propel Singapore’s construction scene forward. We are talking not only about the next three to five years, but 15 to 20 years.”

According to the Building and Construction Authority, the total value of contracts to be awarded in 2014 could be as much as $38 billion, up from last year’s $35.8 billion, which exceeded the official projection of $34 billion. Construction demand this year is being driven by public housing, infrastructure and institutional development projects. The value of new contracts for the next two years is officially estimated at between $25 billion and $34 billion annually.

Key projects announced in Singapore include the Thomson MRT line and the Eastern Region Line, the North-South Expressway, Changi Airport terminals 4 and 5, as well as Project Jewel, a mixed-use development at the airport to be built by CapitaMalls Asia and Changi Airport Group.

“Many people don’t like construction companies, thinking they are very susceptible to the booms and busts of the economy. But I think Lian Beng is very different from the rest,” says Wong. The company, as he tells it, has a “superior” construction business model that enables it to achieve net margins of more than 10%, compared with 5% to 7% for many of its peers.

Notably, he adds, Lian Beng has been developing a recurring income stream by supplying building resources and recently taking a 5% stake in Centurion Corp, a developer of foreign-worker dormitories. Centurion is also one of DMG’s 25 picks.

OFFSHORE ATTRACTIONS
In the oil and gas space, DMG has identified Marco Polo Marine, Mencast Holdings, MTQ Corp, Nam Cheong, Pacific Radiance and RH Petrogas as companies to look out for. These counters are trading at seven to eight times earnings, on average, compared to 13 to 14 times for companies in the same sector with bigger market values.

One of these six oil and gas plays that almost did not make it to DMG’s list is Nam Cheong, the world’s No 1 builder of offshore support vessels with a 12% share of the global shallow-water market. “I didn’t like Nam Cheong when I first heard about it. I heard it was a speculative builder, which then prompted me to think of Jaya Holdings,” says Wong. Jaya Holdings was mired in debt a few years ago and struggled to find buyers for its vessels as it tended to build first before securing an order.

“I decided in the end to take a look at Nam Cheong. They are very different from Jaya. They know their end-customers very well. [Malaysian oil and gas giant] Petronas is their end-customer, accounting for 50% of their revenue,” he adds.

Among other things, Nam Cheong is able to keep overheads low as it builds most of its vessels at yards owned by its Chinese partners, according to DMG. At the same time, it maintains quality by using globally-recognised Western brands and having their supervisory teams on site during construction.

One of DMG’s all-time oil and gas favourites that had to be dropped from the list is Ezion Holdings. It was excluded as its market value has exceeded DMG’s ceiling of $2.5 billion set for small caps. “It is now in quasi-blue chip territory. People know about it,” says Wong.


CONSUMER, PROPERTY PLAYS
The biggest company by market value in the list of 25 is OSIM International, which Wong says is “very much misunderstood”. The way he sees it, OSIM is more than just a maker of massage chairs, which have given it a 50% share in each of its five core markets — Singapore, Malaysia, Taiwan, Hong Kong and China.

“They are brand builders. [OSIM CEO] Ron Sim believes very much in brands,” says Wong. TWG Tea, in particular, is expected to be a new growth engine for the group, which raised its stake in the beverage company early this year to 70% from 53.7%. OSIM has said it would open another 15 TWG outlets by end-2014, bringing the total number of TWG branches to 45.

While general investor sentiment towards property stocks continues to be weak, DMG has identified several companies in the real estate sector that it thinks will do well. They are GuocoLeisure, Roxy-Pacific Holdings and Sinarmas Land.

Among them, GuocoLeisure has a huge ambition of becoming a global hotel operator with a presence in 100 major cities by 2023, notes DMG. Since Mike DeNoma came on board as head of the group’s hotel arm two years ago, GuocoLeisure has retrofitted its flagship hotels and introduced new brands to serve niche segments more effectively.

Notably, the interests of DeNoma and his top managers are aligned with those of GuocoLeiosure’s minority shareholders, as the team has received up to 33 million share options that can be exercised at 86 cents each. “There is strong incentive to move the options deep into the money,” says DMG.

DO YOUR OWN HOMEWORK
In spite of his optimism about the 25 stocks, Wong can’t resist throwing in a disclaimer. “For 17 years, I have been intimate with small caps — 14 years as an analyst, three years as a speculator, a failed speculator. I think that given my history, I should be somebody you ought to listen to. The golden rule, the one principle, in investing is this: Don’t trust analyst reports,” he quips.

“I remember the first day I started work — Dec 1, 1999. That was also the day the Raffles Holdings IPO was launched. I went to my senior property analyst and asked ‘Can buy or not?’ He threw me his report. It was a glowing report. I didn’t do any checks whatsoever and went ahead to buy. The stock never saw daylight. So, don’t just look at our reports. Please speak to the management of these companies.” 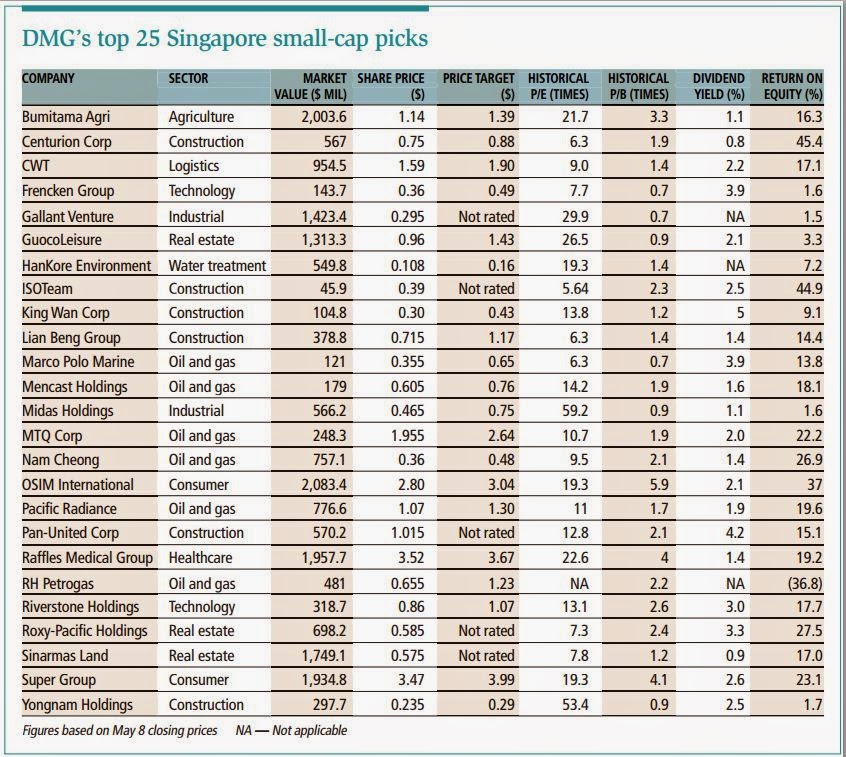