Analysing The Impact Of US Dollar And Yen Volatility (UOBKH)

Analysing The Impact Of US Dollar And Yen Volatility
We highlight companies and sectors that could be impacted by the recent trend reversal of the yen and US dollar vs Singapore dollar.

• Yen pick-up has minimal impact on REITs. For REITs, most of the REITs that have exposure to Japan adopt hedging or natural hedges to match debt with assets. We highlight the impact on the next page. As for non-covered stocks, we discuss the potential impact:

• Saizen REIT (Non-rated): Has 100% of assets exposed to Japan, but gearing is about 30%, so there could be some positive impact from strengthening yen.

• Croesus (Non-rated): Natural hedge through adoption of 44% yen denominated debt to assets. Income hedges of at least 80% of distributable income over the next two years to mitigate income fluctuations. IPO in early May also marked the bottom of the yen decline, hence equity investors would benefit from recent yen rally. 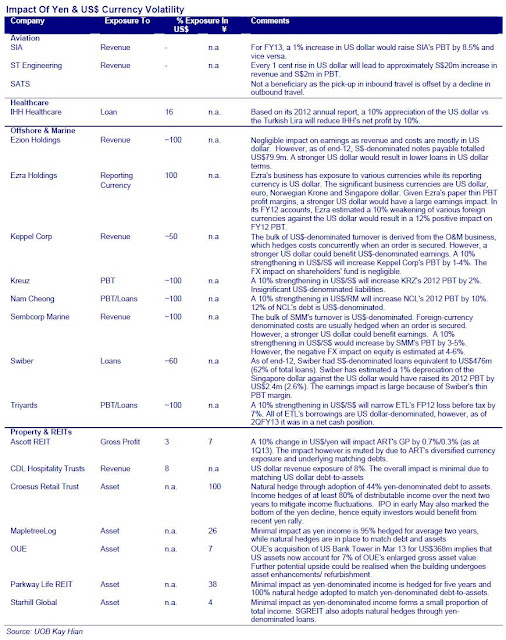 Email ThisBlogThis!Share to TwitterShare to FacebookShare to Pinterest
Labels: SG_Market, UOBKH-Research, US Dollar (US$)