 The underlying strong demand coming from China and India had been supporting the current oil prices. We reckon that there is probability of jet fuel prices to average at US$135/bbl in 2012 (vs. HLIB assumptions of US$130/bbl), potentially affecting airlines profit margin.

Comment
 We believe that airlines will have to increase fuel surcharges (fuel cost pass-through to consumers) in order to protect their earnings.

 AirAsia has just announced higher fuel surcharge (+30-50%) for bookings made from 28 March 2012 onwards, which we has estimated to increase revenue by ~RM72m, just enough to offset increment of US$5/bbl in 2012.

 On the other hand, MAS has not made any announcement yet on higher fuel surcharge. Its wholly owned subsidiary Firefly has re-introduced fuel surcharge for bookings made from 31 March 2012 onwards.

 Based on our sensitivity test, we expect AirAsia to remain profitable if jet fuel priced increased to US$140/bbl, while MAS still in the red in FY12. For every US$5/bbl increase in jet fuel price, AirAsia’s EPS will decrease by ~6%.

 AirAsia is currently trading at a discount to regional and global LCC peers despite achieving highest ROEs and potential higher earnings from recognizing contributions from Thai and Indonesia associates post listing in 2012. Furthermore, LCC business model is expected to sustain during economy slowdown.

Valuation
 Maintained BUY on AirAsia with unchanged target price of RM4.50 based on SOP.

 Maintained SELL on MAS with unchanged target price of RM0.82 based on 6.5x EV/EBITDAR.

Tension in Middle East Cause Oil Price to Surge
In recent months, the political tension in MENA (Middle East-North Africa) region had again created supply gap shortage as well as the fear of further shortage for world crude oil. In the latest incident, US had implemented tougher sanctions on Iran through tightening Iranian access to international finance, which in turn hampering Iran’s ability to sell its crude oil. Several petroleum tanker owners (i.e. Frontline, OSG, etc) had stopped calling at Iran, while Iran’s national tanker fleet is too small to ship all its oil cargo. Iran is the world’s 5th largest oil exporter and 2nd biggest OPEC producer after Saudi Arabia. Currently, world crude oil benchmark WTI is at US$107/bbl and Brent is at US$126/bbl. Jet fuel price had also surge to US$137/bbl (a product of crude oil)(See Figure #1). 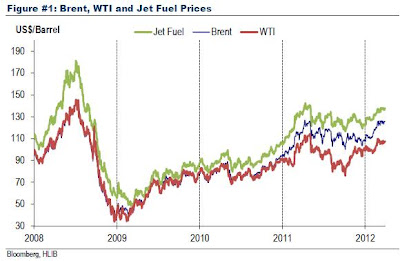 Despite the assurance given by Saudi Arabia to increase oil production in order to meet the supply decline caused by sanctions on Iran, world oil price index remained high. We fear that oil prices (including jet fuel) will maintain at current level for the rest of 2012. Despite potential economy growth slowdown in China and India economy growth, the demand for crude oil will remain robust. China and India demand for imported crude oil had been increasing since 2003 (See Figure #2), providing supports to the high crude oil prices.

Sensitivity of Jet Fuel Price
Internally, we are assuming US$100/bbl for WTI crude, translating into US$130/bbl for Jet Fuel. The current development in MENA continued to add volatility to world oil prices. We believe that airlines will have to pass-through part of the high fuel cost (increase fuel surcharge) should jet fuel price remain above the US$130/bbl level, in order to maintain their profitability. Indeed, AirAsia has just announced an increase to fuel surcharges by 30-50% for bookings made from 28 March onwards (estimated to raise fuel surcharge revenue by another RM72m in FY12, just enough to cover the incremental US$5/bbl jet fuel price), while Firefly (whole subsidiary of MAS) had also reintroduced fuel surcharge for bookings made from 30 March 2012 onwards. Similarly other regional airlines (i.e. SIA and Cathay) have also announced increase in fuel surcharge effective by March-April 2012.

We have done a sensitivity of jet fuel price and fuel surcharge on AirAsia and MAS 2012 earnings. Our base case assumptions on jet fuel price is US$130/bbl with currency exchange rate of RM3/US$. Noticeably, AirAsia is expected to remain profits even jet fuel price increased to US$140/bbl. For every US$5/bbl increase in jet fuel price, AirAsia’s earnings will decrease by ~6%. Furthermore AirAsia had just increased its fuel surcharge, which we estimated to be sufficient to offset the higher fuel cost. Based on our back of envelope estimate, jet fuel price would need to increase to >US$200/bbl for AirAsia to turn into the red (assuming other factors ceteris paribus). 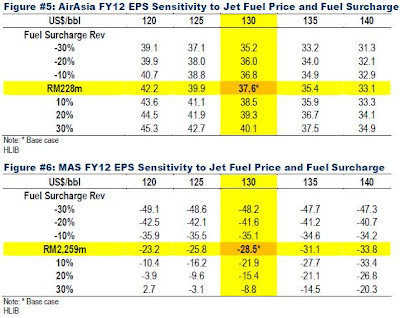 Valuation and Recommendation
Regional airlines and global leading low cost carriers are trading at an average FY12 PER of 16.6x (12.0x ex Tiger Airways) and FY13 PER of 9.3x (See figure #7). AirAsia is currently trading at FY12 PER of 9.0x (only take into accounts of Malaysia operation earnings), which is of discount to the regional valuation. Furthermore, AirAsia is expected to achieve highest ROE among peers at >22.0% (potentially higher after accounting for earnings contribution from associates in 2012). We reckon that LCC is expected to withstand economy slowdown largely due to increasing numbers of budget travellers. AirAsia is also keen for another 3 new JVs in Asia. Hence, we maintain Buy recommendation on AirAsia with Target Price of RM4.50 (based on 10x FY12 PER inclusive of Thai and Indonesia associates).

On the other hand, we maintain Sell recommendation on MAS with Target Price of RM0.82 (based on 6.5x FY12 EV/EBITDAR) with major concern on the execution of its business turnaround plan. MAS has reported weak operation numbers ytd, indicating another loss making quarter, which will continue to eat up its existing cash level of RM1bn (as of Dec 2011), while debt level was at RM5.7bn. 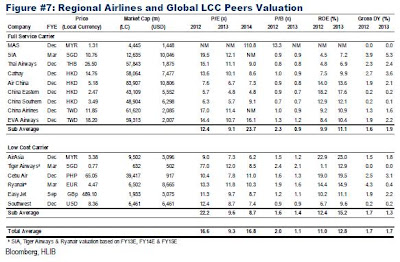